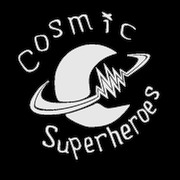 According to keyboardist/vocalist Paul Sanders (formerly of Saunter), "We've all been so excited about this project because it seems to just keep getting more and more ridiculously fun and experimental."
It’s just one cosmic event after another, and even Raleigh’s INDYWEEK has taken notice: “...fun loving Triangle quartet takes an eclectic journey through atmospheres studded with psychedelic guitar workouts and slightly funky, slightly folky alt-rock.”

Coincidence and chance meetings have been a recurring theme for this band: In the early weeks of 2016, the last remaining founding member Brandon Scott McLean (formerly of Windsor Oaks Band, Cougar Magnum) decided to post an ad on Craigslist to rejuvenate the bass department. Cosmically, a locally renowned bass-extraordinaire Paul Benner (formerly of Beggar's Caravan) answered the call. Even more Cosmic, it turned out Brandon and Benner had known each other since 2009.

At one point some years ago, the band was forced to pound the pavement in search of a drummer. Serendipitously, local drumming sensation and longtime friend of the band reached out and solved that problem: "I heard you were looking for a drummer...maybe we could get together and jam sometime and see where it goes..." -Bongo John (formerly of Zegg, Triplicity, and current Professional Recording Engineer at his very own studio in Cary, NC). Bongo John has been the drummer for several years now. The line-up changed again in 2021 with our multi-talented bassist Beamon Joseph giving momentum for the band  and powerful vocals.  As of recently, Beamon has decided to function as part-time bassist / guitarist  for the band and now the wonderfully talented Curt Turner is our current bassist.

With a very busy local-to-central-NC spring and summer touring schedule chock full of private back yard parties, festivals, and downtown stages, you can probably expect a new level of trancy-fancy-jams mixed with acoustic-ninja-disco-style so you can sing and dance your butt off.
Band's Official Website